Back in the late 1970's - early 1980's, the first computer games were developed and an incredibly popular form of gaming was text adventures. Perhaps the first was known as Zork, and this was enjoyed by many gamers. The concept of this kind of game is simple, you play a character, much like the role-playing games of today, but every instruction is given by simple text. 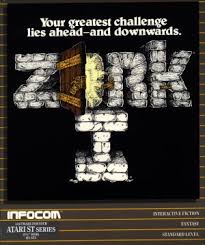 I discovered a site that is home to lots of these original games along with some new ones and it occurred to me that this would be a great tool for practicing English and forming simple sentences.

The site can be found here. so and give it a try.